It had been over 10 years since I had first seen Blue Man Group at the Charles Playhouse. I had been talking about bringing the kids for years, and recently I the opportunity to do so!

When we arrived at the Charles Playhouse, Owen was immediately attracted to the light and sound installation in the “Lounge-U-Lum.” He spent some time playing with the interactive light and sound panels before the show.

Snacks and beverages can be purchased before the show at the bar and enjoyed in your seats during the show! The lounge also has a small souvenir shop with items such as t-shirts, magnets, DVDs, and even drum sticks.  We chose to find our seats a little early, a waitress came around to take food and drink orders and delivered them right to our seats! While we waited for the show to begin an usher offered to bring a booster seat for Owen so he could get a better view of the show! 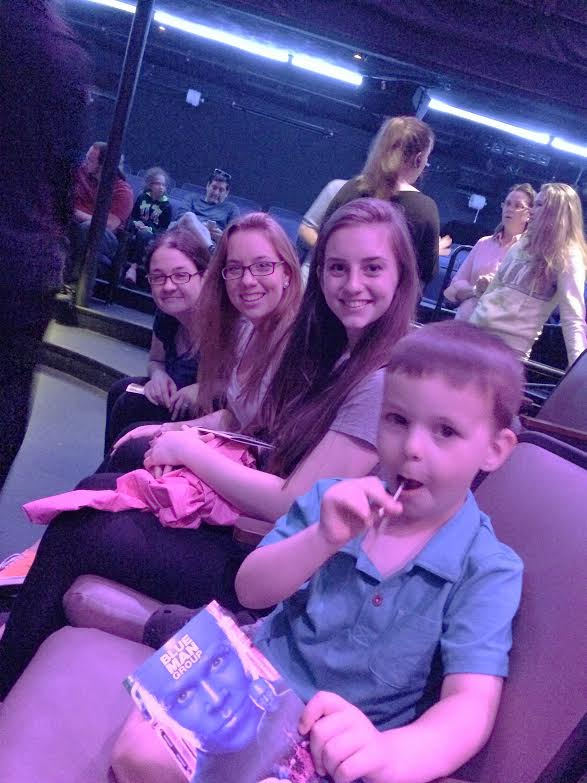 Leading up to the performance, I played several videos to show Owen what Blue Man Group was all about. He recently developed a fear of the dark so I wanted prepare him what was to come. My plan backfired, as the show grew closer he was telling me that he was “scared of the dark”. I took him out into the hallway where a TV is available to watch the performance. After few minutes of convincing him it wasn’t scary we went back to our seats. Unfortunately that didn’t last so his Daddy offered to bring him for a walk to a nearby park while the girls and I enjoyed the show.

The BMG show is recommended for kids five and older for several reasons – the theater is dark, the loud music, and at points there are bright strobe lights. It might be sensory overload for some kids. There are complimentary earplugs and earmuffs for anyone who wants them. Occasionally, Sensory Friendly performances are available.

The show is a mixture of high energy, music, art, dancing and comedy all rolled into one! Awesome music from the in-house band, paintball spin art, pipe drumming, and a hilarious but messy Twinkie dinner!  A few lucky audience members were chosen to participate in the show. The best part is the that entire audience interacts with the show, especially during the epic dance party finale!

After the show the performers are available for photos in the lounge and to “sign” programs, tickets, or even your face!

Know before you go:

– The Blue Man Group show is all ages and designed to be a multi-generational entertainment experience, but children under 5 are not permitted.

– Ponchos are provided for anyone who is in the poncho area.

– If you arrive late you will be seated by an usher at an appropriate break in the show. And you may even be in for a little surprise!

– Photography and/or recording is not permitted. 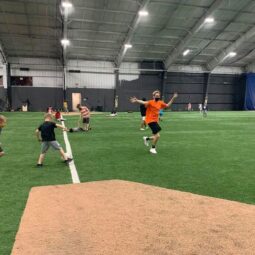