You are here: Home / Uncategorized / Date night disaster…sort of 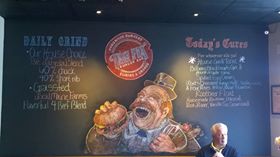 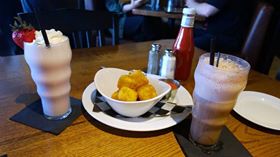 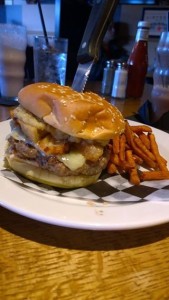 To start off our date I wanted to try The Fix Burger Bar  it opened last week here in Worcester. The hubby loves a good burger so I knew there would be no objection there! It is located on Shrewsbury Street at the old Mezcal location. We were seated right away and the staff was very friendly and attentive. We browsed through the menu and decided on a strawberry shake and an egg cream for our drinks (also available spiked). I was really happy to see an egg cream on the menu, it is one of my favorite drinks but few places offer them (it’s sort of a carbonated chocolate milk). With the waitress’ recommendation we ordered the blue cheese polenta tater tots as an appetizer, very yummy and came with ranch and buffalo dipping sauces. Hubby got the Crunchy Burger: lettuce, fried prosciutto, parmesan crisp, potato chips, garlic mayo, and mustard pickle with fries, and I went with the Pork Stack Burger: pork belly, hot mustard apple sauce, slaw, cheddar , sesame bun with a side of onion rings. The drinks and appetizer came out quickly but the burgers were a bit of a wait, which is understandable since they had been open less than 12 hours. While we waited for the food our waitress came by to chat a few times and ask us if we needed waters or anything else. Our burgers came out and were cooked just as we asked, they were very tasty, messy and filling. We had a happy mistake, as the fries that were on our plates were sweet potato fries instead of the regular fries and onion rings that we had ordered. The replacements came out quickly, but I loved the sweet potato fries, they were perfectly seasoned! So the mistake was fine by me. Overall we had a great dinner, I look forward to trying more of the unique menu options at The Fix Burger Bar.

Now to the disastrous part…sort of

A few weeks back I had purchased tickets to see “Luma: Art in Darkness” at the Hanover Theater. As a family we have seen several shows at the Hanover that we have enjoyed them immensely. The theater is beautiful and you have a great view no matter where you sit. The description of “Luma” sounded so fun: “LUMA plunges the audience into a darkened space where a tapestry of illuminated illusions fills the stage. With high and low technology, the work of shadowed performers utilize brilliant images of color and motion onto the back of the eye, playing upon the persistence of vision that comes with the interplay of shadow & light.” How could we pass it up? Especially after seeing half price tickets offered on Goldstar.com. I was even more excited when we picked up our tickets at the “will call” window and discovered we had front row seats! The show started with the creator coming on stage and describing what his inspiration was for creating the “Luma” and he also entertained us with some juggling and corny jokes. The lights dimmed and the show began. The first scene was slow to get going, it was a completely dark theater so the actors could not easily be seen but the lights could be. It was basically some long wavy glow ropes and sticks waving around with a “person” made of similar lights.  “Ok” I thought I am sure it will be better as the show goes on. Well by the third scene it was still slow and uneventful so we decided to leave 30 minutes into the show. We stepped out to the lobby to make out final decision to stay or go. Turns out we were among several other people making the same decision. We chatted with some of the ushers who apologized for the disappointment. Which in turn we told them we had never before been unhappy with a show at the Hanover Theater and look forward to seeing “Elf, the musical” in November. So we made our way home much earlier than expected, but all in all had a great night out with full bellies, time together and lots of laughs. The lesson learned was that not everything has to go as planned to have a memorable night out.