You are here: Home / Uncategorized / Some VERY Exciting news from Edaville USA!!! 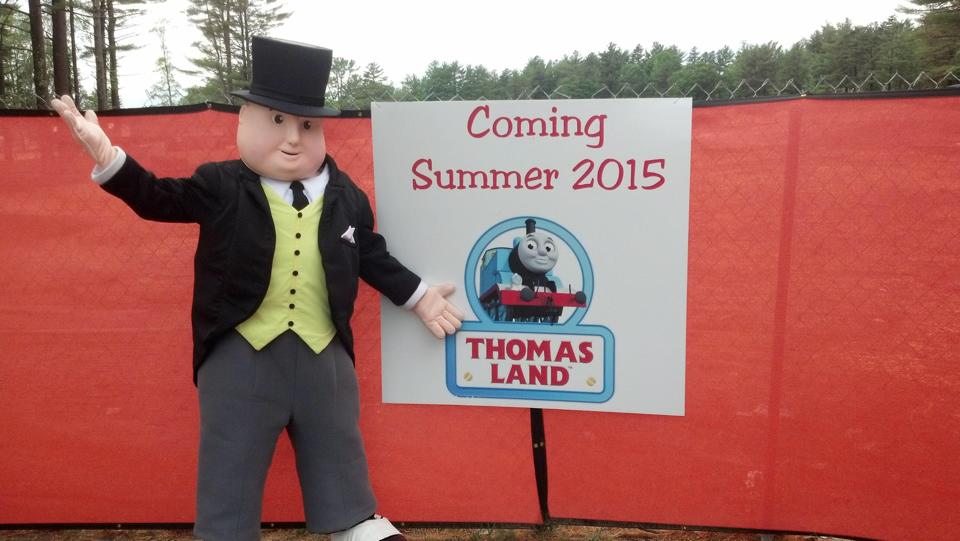 Edaville is Owen’s favorite place to visit and they have some VERY exciting news to share! There are so many new and exciting additions and improvements happening at Edaville over the next few months and years. But here is all the details on the one project that has us the most excited!!

Thomas the Tank Engine®, along with his friends and favorite destinations from the Island of Sodor, will come to life next year with the opening of the Thomas Land™ theme park within Edaville USA, a family amusement park and heritage railroad located in South Carver, MA, convenient to the greater Boston and Providence areas. Thomas Landwill be the largest permanent Thomas & Friends® attraction in North America. The new park is currently in development by Jon Delli Priscoli, owner of Edaville USA, in close partnership with HIT Entertainment, one of the world’s leading preschool entertainment companies, and a division of Fisher-Price. Thomas Land is slated to open in early summer 2015, with an official ground breaking in early July. Sid Mathur, Vice President, The Americas, HIT Entertainment, said, “As we approach Thomas & Friends’ 70th anniversary in 2015, Thomas Land is Thomas’ next great destination and a testimony to Thomas the Tank Engine’s enduring popularity. We’re thrilled to partner with Edaville USA to open this new family attraction that Thomas fans have been waiting for. With its emphasis on a quality family experience, and given our long time partnership through the Day Out With Thomas tour, Edaville is the perfect partner for Thomas Land.” Delli Priscoli, said, “Edaville USA has been a family friendly destination for Thomas fans for more than 13 years as a host railroad for the popular Day Out With Thomas tour. Since Day Out With Thomas first came to Edaville,we’ve always envisioned opening a larger Thomas theme park. Thomas Land will be a one of a kind Thomas experience, and we’re looking forward to bringing the magic of the Island of Sodor to life here at Edaville.” Set in a lush New England landscape, the new Thomas Land will cover 11.5 acres and boasts 14 rides based on Thomas & Friends and the Island of Sodor.

Attractions at Thomas Land will feature a 20-minute long, scenic train ride on a life-sized Thomas the Tank Engine, and theme park favorites including a roller coaster, drop tower, Ferris wheel, soft-play area and much more. All of the rides and attractions will feature beloved characters such as Thomas, Diesel, Toby, Cranky the Crane, Harold the Helicopter, and more favorites. Guests can visit familiar destinations around the Island of Sodor like Tidmouth Sheds, Knapford Station, and Brendam Docks. Sir Topham Hatt, Controller of the Railway on the Island of Sodor, will be on site to greet and take photos with guests. More details will be revealed in the coming months leading up to the park’s grand opening. There are currently two other Thomas Lands in operation worldwide. The first was opened in 1998 at Fujikyu Highland amusement park in Japan, 90 minutes from Tokyo. The second Thomas Land, and Europe’s first, was opened in 2008 at Drayton Manor Theme Park in the UK. Together, both parks attract nearly 3 million visitors each year. Edaville USA is a family amusement center entertaining families for nearly 70 years. Delli Priscoli purchased Edaville and its 250 acres in 2002.  There have been many exciting updates under his ownership including the reconfiguration of the entire narrow gauge rail course and the incorporation of vintage amusement rides such as an antique carousel and an illuminated Ferris wheel. Other attractions throughout the year include, Day Out With Thomas; the National Cranberry Festival, which features a train ride through the fall cranberry harvest; and the Christmas Festival of Lights offering rides through brilliantly lit displays in the winter. Thomas Land will be Delli Priscoli’s biggest undertaking at Edaville to date. 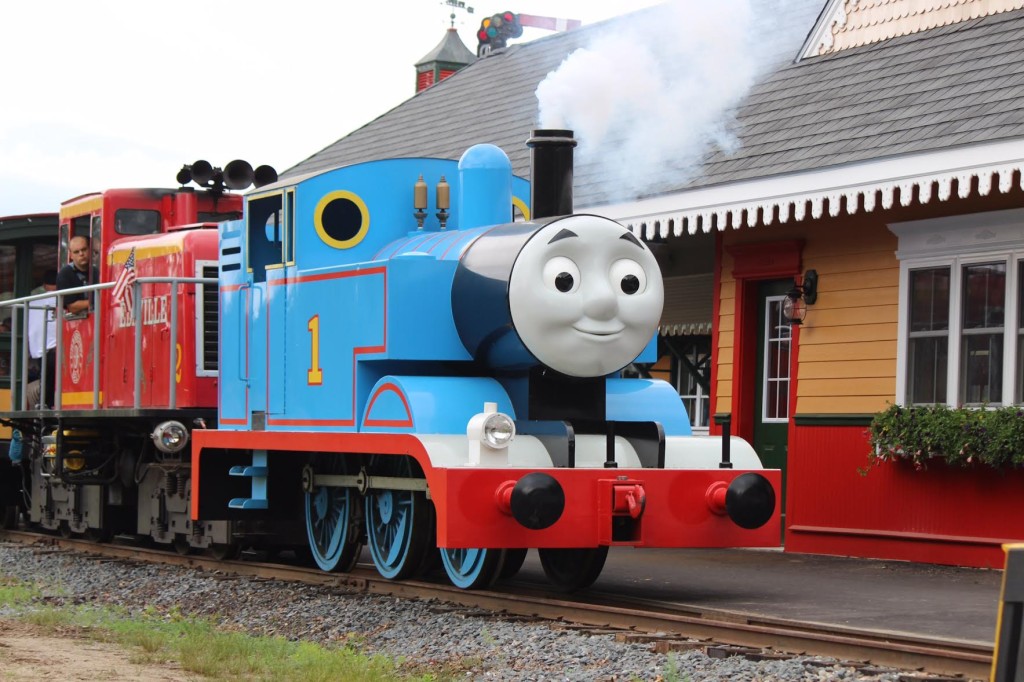 About Thomas & Friends™ Thomas the Tank Engine was created by a father for his son nearly 70 years ago and today is enjoyed by families in more than 185 territories and in 30 languages.  The #1 blue engine and his friendsinvite children to enter a world of imagination through the tracks of a train and the words of a story. Children embark on adventures with their engine friends while experiencing timeless life lessons of discovery, friendship and cooperation.  Thomas & Friends makes tracks to great destinations on PBS KIDS®, Sprout® and with downloadable episodes available through iTunes. For more information about the world of Thomas the Tank Engine and his friends,please visit www.thomasandfriends.com. Follow Thomas on Facebook at facebook.com/thomasandfriends and Twitter @ThomasParent.   About Edaville USA The heritage railroad was started shortly after WWII by Ellis D. Atwood, who built a 5½ mile rail bed around his then 1,800-acre cranberry plantation, where he then installed two-foot narrow gauge rails and trains he had purchased in Maine. Edaville USA, originally named for Atwood’s initials, opened in April of 1947 and is thought to be one of the world’s first tourist railroads. Atwood used the railroad to harvest cranberries and take tourists sightseeing through the plantation. Today Edaville is one of the last amusement theme parks in New England that caters primarily to young children and their families, which often span several generations.   About HIT Entertainment HIT Entertainment is one of the world’s leading preschool entertainment companies, specializing in building powerful brands based on engaging stories.  HIT Entertainment’s world-class portfolio includes  Thomas & Friends®, Mike the Knight™, Fireman Sam®, Bob the Builder, Barney®, Angelina Ballerina®, Pingu® and Rainbow Magic®.   HIT Entertainment excels at creating and building globally successful brands which capture the hearts and imaginations of preschoolers and their families.  This is achieved through exceptional storytelling in multiple formats, enhanced by creating high quality character-based products and experiences with best-in-class partners. HIT Entertainment’s lines of business span television and home entertainment production, content distribution, digital media, publishing, consumer products and live events and attractions.  HIT Entertainment, a division of Fisher-Price, and a subsidiary of Mattel, Inc. (NASDAQ:MAT), has operations in the UK, US, Canada, Hong Kong and Japan. For more information visit www.hitentertainment.com       About Fisher-Price Fisher-Price, Inc., a subsidiary of Mattel, Inc. (NASDAQ:MAT) located in East Aurora, N.Y., is the leading brand of infant and preschool toys in the world. The company’s legacy of high quality toys has enhanced early childhood development for more than 83 years. Some of the Company’s best-known “classic” brands include Little People®, Power Wheels® and Imaginext®. Fisher-Price is also a leading developer of baby gear products (infant swings, bouncers, high chairs), as well as a wide array of character-based toys inspired by high quality children’s programming such as Dora the Explorer™, Mickey Mouse Clubhouse and Thomas & Friends™. The Company’s website, www.fisher-price.com, as well as its Facebook page, www.facebook.com/fisherprice provide valuable information and resources to parents and grandparents around the world.